This weekend, thousands of concert-goers will descend on Chicago summer’s last musical hurrah: Riot Fest. With acts ranging from the Front Bottoms to Blondie, this year’s riot fest lineup has something for just about any music fan out there. Since its beginnings as a multi-venue punk festival in 2005, Riot Fest has since expanded to both Denver and Toronto, and offers year-round musical events and programming in the Chicago metro area. Check out some of the acts that piqued our interest below.

You would be hard pressed to name a group that’s blurred the lines between protest and music more than Pussy Riot. This Russian, feminist, punk group has made a name for themselves with bold, public demonstrations against Vladimir Putin’s authoritarian government, earning themselves criminal charges of “hooliganism” from the Russian state. You may have seen their most recent act of defiance this summer, as members stormed the field during the World Cup Final in Moscow as part of a demand for a freer Russian democracy. Much of their released music brings crisp, almost sweetly melodic production to hard-hitting lyrics about political persecution and empowering women, but don’t expect their set to reflect quite those same characteristics. Pussy Riot is as much a performance art group as they are a band, and their shows mix musicality with an unrefined rebellion that defies – perhaps transcends – the bounds of any solidified genre. That’s certainly not to say we aren’t in for a treat: other sets in the US have seen the group tearing free from body bags in their signature neon balaclavas as an authoritative voiceover shouts military commands at them. You can find them at the Radicals stage at 3:00 pm on Friday for a show that could be just about anything – except boring.

Since the release of their eponymous first album in 1991, Cypress Hill have been bringing their signature west coast sound to the ears of listeners worldwide. Some of the most influential rappers of all time, and the first Latino rap group to go platinum, the veteran LA emcees will deliver the “phunck” to this year’s riot fest show. Though their name might not sound so familiar to younger listeners of rap, they are undoubtedly one of the most influential groups of the late 1980s. If you are a fan of rap, you would be remiss to skip out on getting insane in the brain with the undisputed OGs of California hip-hop.

Once you’ve slaked your thirst for the funky fresh rhymes of Cypress Hill, take a cross country trip to the chilled-out, cool cat rhymes of New York emcees Digable Planets. Reminiscent of their NYC contemporaries, Tribe Called Quest, Digable planets are defined by their funky production, and calmly clever rhymes. Though they’ve only released two studio albums, both in the early 1990s, the Planets have left a sizable imprint on East Coast hip hop culture. Their first album, Reachin’ (A New Refutation of Time and Space), released in 1993,  is riddled with classics like “Rebirth of Slick (Cool Like Dat)”, “Time and Space (A New Refutation of)”, and “It’s Good To Be Here” these cats are ready to keep reachin’, even in 2018..

Fresh off the release of their second album, Virtue, The Voidz (fronted by strokes veteran and lead singer Julian Casablancas) are poised to tear up the Riot fest stage on Saturday. In a 2018 interview with Rolling Stone, Casablancas described his work with The Voidz (quite fittingly) as continuing “his personal vision quest.” On Virtue, listeners are greeted by Cassablancas’ signature angst-soaked vocals over a bed of psychedelically distorted guitars, thumping bass, and electronic in studio-tricks that give Virtue, and The Voidz as a whole their distinctly post-strokes sound. Check out the video for the first single off Virtue, Qurryus, here.

Chicago natives Twin Peaks are the princes of the Midwest’s contemporary rock scene. These five guys, friends since elementary school, have been cranking out down-to-earth yet upbeat garage rock jams since 2013, and they’re only getting better. Their most recent release, “Sweet ‘17 Singles,” featuring absolutely idyllic tracks like “In The Meadow” and “We Will Not Make It (Not Without You), is a 12-song demonstration of how comfortable this group is becoming in their own skin. The natural ease on display seems only fitting for a band that, according to vocalist/guitarist Cadien James, is pretty much always “just winging it.” If you’ve been lucky enough to catch one of Twin Peaks’ many visits to Madison, you know that their live shows supply an energy that lends itself equally well to jamming by yourself or crowd-surfing with a beer in hand. They’ll be at the Roots stage at 5:30 on Saturday.

Despite their last studio release having been in 1998, Chicago-based band The Jesus Lizard has come together for their second reunion tour and is bringing their classic alt-rock sound with them. The group never quite found the commercial success they might have expected to come along with the critical acclaim received by their albums “Head” and “Goat.” Their work still deserves recognition for the effect it had in ushering in the 90s era of rock, though; they once co-recorded a song with alternative/grunge legends Nirvana. The Jesus Lizard will be tearing up the Rise stage at 8:00 pm on Saturday.

Led by the timeless and versatile Debbie Harry, Blondie has thrived through the past half-century of American music. The group solidified themselves as a defining feature of the new wave movement in the late 70s with universally-recognized classics like “One Way or Another” and “Call Me.” Their eleventh studio album, “Pollinator,” released last year, gave us the staple group’s take on the late 2010s. With features and writing by the likes of Sia, Charli XCX, and the Strokes’ Nick Valensi, Blondie continues to deliver the tight, tough pop that has defined them for more than four decades. We’re lucky to still have these veteran performers doing their thing, and you can experience them and their generation’s worth of style on Sunday at 5:45 on the Roots stage. 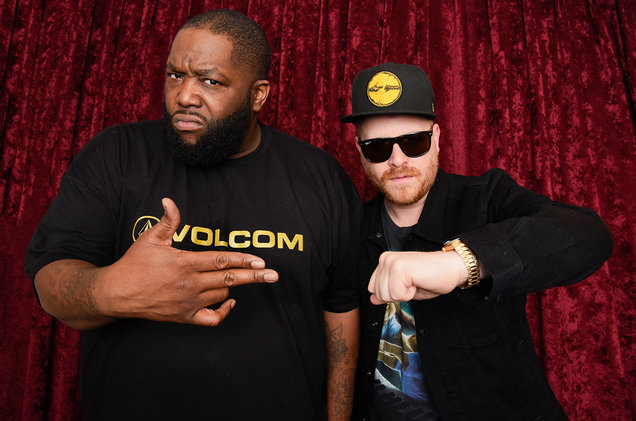 One would be hard pressed to find a more influential, socially conscious, lyrically clever, and simply dope musical group than Run The Jewels. Since 2013, Atlanta rhyme-smith Killer Mike and rapper-producer El-P have been tearing up the rap scene. From appearances on stage with Bernie Sanders at political rallies, to imploring their musical rivals to, in the words of El-P, “run naked through a field of dicks”, RTJ are, if anything, hard to miss. Their three self-titled albums (Run the Jewels one, two, and three) released in 2013, 2014, and 2016 respectively were all released to critical and fan acclaim. The aggressive, synth and distortion-heavy production style of El-P paired with the absolutely brutal vocal timbre of Killer Mike (a lyrical virtuoso) is an unmissable live act, and if you’re lucky, they might even bring you up on the Riot Fest stage to perform a hit or two.

At the crossroads of the Black Keys’ fuzzy toughness and the traditional Chicago Blues of legends like Bo Diddley, sits the vintage, rolling music of JD McPherson. Last year’s “Undivided Heart and Soul” is McPherson’s first album with New West Records and his third full-length record. In it, the Oklahoma-born artist takes on a slightly more personal tone – McPherson is experimenting for the first time with writing songs based on lived, rather than fictional, experiences; one song off the new album, “Let’s Get Out of Here While We’re Young,” was written in collaboration with his wife, Mandy. You can expect a smattering of rock, r&b, and blues hits like the joyfully anachronistic “North Side Gal” at McPherson’s show, which kicks off at 2:15 pm on Sunday at the Roots stage.